A machine is a device that makes work easier.

In machines, an effort (force in Newtons) is applied to move the load.

The effort can be

A muscular effort from man or

Force derived from an engine.

The principle used in a simple machine is to produce a bi force overall small distance by using a small force over a large distance.

The force which we apply to the machine is known as effort (E) and the load we have to overcome is known as the load (L). both force and load are measured in newtons.

These are devices that work with one movement and change the size and direction of the force.

A lever is a rigid bar which is free to move about a fixed point, the Fulcrum or pivot

Levers are divided into three classes

(i) The first-class levers

(ii) The second class lever and,

This is a type of lever in which the fulcrum is between the effort and the load.

Examples of the first-class lever include Craw bar, scissor, beam balance, scissor and pair of pliers,

Here the load is between the effort and fulcrum.

Examples are a wheelbarrow, nutcracker, and office punch

Here the effort is between the load and fulcrum.

Examples are a wheelbarrow, nutcracker and office punch

This is the ratio between the load and the effort applied.

The bigger the mechanical advantage the better the machine since small effort can lift a bigger load.

Factors that may lower mechanical advantage

Friction; the higher the friction the lower the mechanical advantage

Weight of moving parts: the heavier the parts the lower  the mechanical advantage

Velocity ratio  has no units

The bigger the velocity ratio the less effort required to do work and the more efficient the machine.

In other words, the machines require less effort to overcome a big load when effort moves a bigger distance compared to the load in a unit time.

A pulley is a wheel with a groove ring that passes or string.

Pulleys may be categorized into

Pulleys reduce the effort to lift an object by increasing the distance and /or direction over which the effort is applied.

A single fixed pulley is a single wheel with concave grooves fixed to support as shown in the figure above. A rope, chain, or cable passes over the groove of the pulley. One end of the rope is attached to the load and the effort is applied at the other end.

If a user pulls down on one end of the rope (Effort), the other end (Load) will raise up an equal distance in the opposite direction

The primary benefit of a single fixed pulley is to change the direction of the effort to move a load to a point (such as the top of a flagpole)that cannot be reached by the user.

Characteristics of a fixed pulley system

(i) It has one wheel inside the pulley

(ii) The pulley is mounted to a strong solid support

(vi) Has uniform tension in the rope

Application of a single pulley system

(i) Removing water from a well

(b) A single movable Pulley

This is a pulley that moves along with the load attached to it. One end of the rope is tied to a fixed support and passes over the pulley and the other end where effort is applied makes a U-turn to the user as shown below.

Characteristics of the single fixed pulley

(i) Its mechanical advantage = 2, that is the effort required to lift the load is half the size of the load.

(ii) Its velocity ration = 2, that is the effort moves twice the distance moved by the load.

The framework of pulleys is called block and the rope passing over each pulley is called tackle.

Characteristics of the block and tackle system

Application of Block and Tackle

They are commonly used to raise or move load in

A force of 10N is required to raize a load, L, using a smooth (frictionless) and weightless block and tackle system of four pulleys. Calculate:

(iii) Effrt distance if the load rises by 2m

Work in put = work out put

The efficiency of a machine indicates how well its input energy is converted to useful output energy or work.

Efficiency = Mechanical Advantage / Velocity ratio.
In an ideal machine (with no friction), the efficiency = 1, also known as 100%.

How can efficiency be increased

Graphical relationship between M.A and Load

When M.A or n are plotted against load, the following graphs are obtained.

Explanation of the shape of the graph

The efficiency of the pulley system increase with the load because when the load is small, the weight of the lower moving pulley block and friction is significant.

The weight of the lower movable pulley block and friction become negligible to the load as the size of the lad increases.

(i) What is the velocity  ratio of the system

(e) Give two practical applications where the pulleys are used.

(e) they are  used in cranes, breakdown, ships, for lifting

This refers to a type of a machine in which a plane is inclined to an angle to the horizontal such that one end is higher than the other. by angle Θ

Examples of inclined plane include

A load of 40N ispulled steadily from A to B along inclined plane by a force F as shown in the figure. Find the velocity ratio of the system.

A wooden plank 3m long is used to raise a load of 1200N through a vertical height of 60 cm. if the frictional force between the load and the plane is 40N. calculate

(a) The effort required

(b) The mechanical advantage

The wedge is a kind of simple machine which is an inclined plane having one or two sloping sides. With a wedge, the sloping surface is pushed through the material which is held still.

Uses of wedges include: Cutting, pitching

A wheel and axle is a type of simple machine made up of a wheel and axles rigidly attached to each other so that they turn together about an axis.

The effort is applied to the larger wheel and the load is raised by string attached to the axle of small diameter as show below:

For one complete turn, the load and effort move through distances equal to the circumference of the wheel and axle respectively.

Characteristic of Wheel and axle

Uses of wheel and axle

The figure below shows a wheel and axle system. When an effort of 300N is applied, a load of 900N is raised through a distance of 1.0m.

(b) The efficiency of the machine

A gear is a device that consists of a set of toothed wheels. Gears change the direction and speed of rotation. They are similar to the wheel and axle. In the gear wheel, the effort and the load are applied to the shafts connected to the gears.

The velocity ratio of gears depends on which gear wheel is the effort applied.

Torque may be applied to the smaller gear in order to increase the torque and decrease the rate of rotation of the larger gear.

Torque may be applied to the larger gear in order to decrease torque and increase the rate of rotation in the smaller gear.

A screw may be considered as continuous inclined plane wound around a cylindrical threaded rod.

The velocity ration of screws

(a) In a screw jack the length of the handle is 24cm and the screw pitch is 2mm if it is used to raise a car of mass 2000kg, calculate

(i) The effort required

(b) Comment the value of M.A obtained in (a)(iii) above

(b) MA = VR because the screw jack is assumed to be perfect, i.e. frictionless

NB in practice the effort must be higher than 26.54N in order to overcome friction

A car weighing 1600 kg is lifted with a jack-screw of 11mm pitch. If the handle is 28cm from the screw, find the force applied. 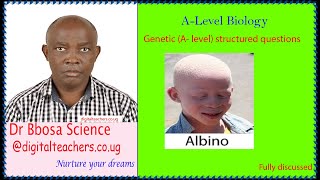 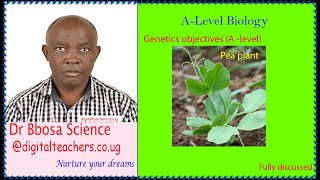 Genetics A level lesson 2 of 2 (A-level) 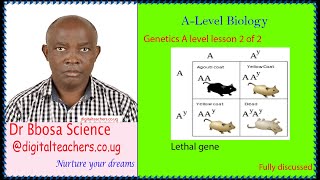